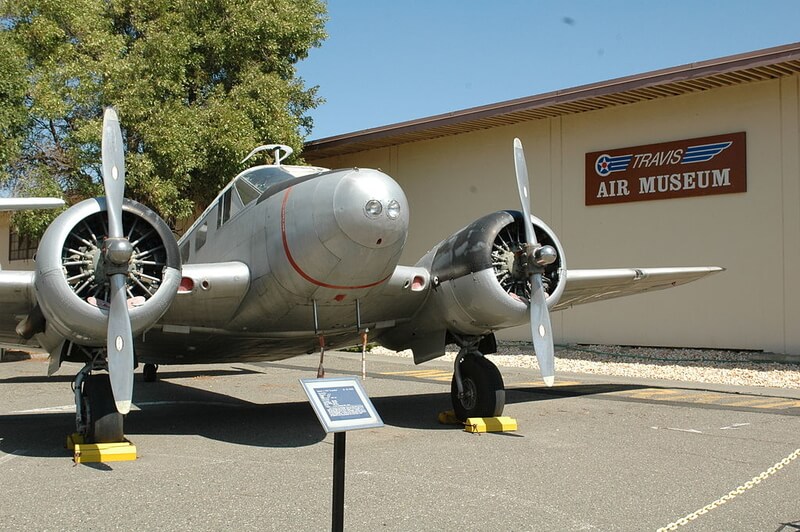 Fairfield, California is home to one of America’s most patriotic sights in aviation, the Travis Air Force Base Heritage Center, also known as the Jimmy Doolittle Air and Space Museum. Established in 1986 and with over 20,000 yearly visitors, it’s fair to say that this Museum is an icon of California, and surely an icon for aviation historians. Located at Building 80, 461 Burgan Blvd, Travis AFB, Fairfield, CA; let’s take a look at why you absolutely must make it a point to stop at this great source for military history.

In the Early 1980‘s Col Tony Burshnick, Commander of the 60th Military Airlift Wing at Travis Air Force Base got together with a group of both retired air-force members and aviation enthusiasts to form an organization to advocate an on-base air museum. These men wanted to see to it that American aeronautic history would be preserved, and so they began on this valiant mission to see to that goal.

It wasn’t a year before the Travis Air Museum was approved by the secretary of the Air Force and Public Affairs. Yet, even with that approval, they couldn’t procure a facility, making the journey far from over. It was imperative to these brave men that the history of the Air Force, Travis Air Force Base, and airlifts in the pacific be preserved for future generations to know.

They began a campaign to acquire as many aircraft and artifacts for the museum as possible. They would quickly acquire aircraft such as the Douglas C-124 Globemaster II, a massive heavy-lift cargo aircraft used by the Air Force until 1974. Eventually, Col John Tait, Commander of the 60th Military Airlift Wing, saw fit to grant the museum a recently decommissioned commissary at the base to store the collection of aircrafts the museum had quickly amassed.

By the beginning of the 1990s, the project saw open approval by many who supported their cause, both famous and not. One such famous man was General Jimmy Doolittle, a Medal of Honor recipient and known widely as an aviation pioneer. Doolittle expressed his approval through a signed photo he sent to the base, commending them on their accomplishments and decision to create the air museum. After Doolittle passed away, the museum would honor him by renaming the Travis Air Force Base Heritage Center to the Jimmy Doolittle Air & Space Museum.

After the 2000s, the efforts of the people who created the museum were widely recognized. It was seen as being a major advantage to the interests of the community and to the Air Force as well, encouraging them to build a brand new Air Force museum in the same general area. Careful planning and many artist’s concept sketches went into the plans for the new museum, but difficulties also arose that would prevent them from going through with the plans.

The Heritage Center is open Tuesday through Saturday, with their operating hours being 10 AM to 4:30 PM. Because they are run mainly by volunteers, they are sometimes closed on Saturday, so be sure to call a week ahead of a planned visit to make sure.

Getting to R&S Erection of Vallejo from Travis Air Force Base Heritage Center, Fairfield