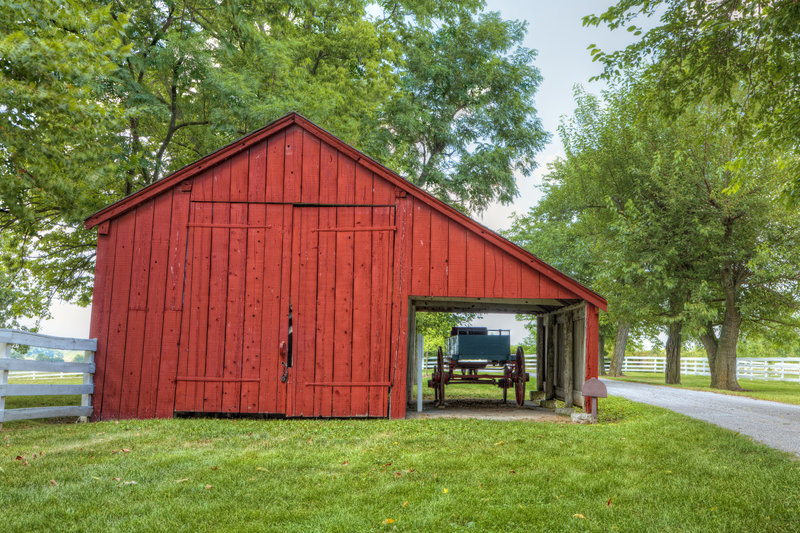 Ever since humans invented wheels, and used them to cart their goods or transport their bodies from one place to another, there has been a desire to safely shelter their particular modes of transportation.

As a result, the doors (or lack thereof) that protected these valuable possessions have gone through an evolution that is in direct correlation with the invention of power, automation, and the availability of ever lighter-weight materials.

Garage Doors Through The Ages And How they’ve Progressed

The original garage door was a framed opening

The first evidence of wheels showed up in 3500 B.C.E., and archeologists think wheels may have been invented and used even prior to that. Originally, wheeled carts and wagons were secured in open caves or covered enclosures. Eventually, and depending on the skill or wealth of the wheeled object’s owner, they were further secured via doorways that were typically created from wood, tanned animal skins, or woven piece of cloth.

The advent of the carriage house door

As time marched on, wealthier cart and carriage owners, or those who had skilled hands and access to building materials, constructed wooden doorways – called gatehouse or carriage house doors.

These doors were very heavy, which made them very secure and harder to open or break open when barred close. And, because carriage houses often housed the animals who pulled the carriage, the buildings were detached from the home. The doors were made of wood, very large, and quite wieldy to open. Carriage house doors usually consisted of two separate panels that swung out to gain access.

From carriage house to garage door

Those of us who have the honor to live in an older home, circa 1900 and prior, may even have a surviving carriage house, now converted to a bona fide garage, a rental/in-law unit, or some other outbuilding purpose.

Most of us, however, live in homes, condos, or apartments with designated garages. This is mostly thanks due to Henry Ford, who took the invention of the automobile and put his assembly line stamps on the works. As a result, automobiles became available to the middle-class and working masses, which meant car owners needed a place to store them safely and securely.

Since automobiles were smaller than most wagons or carriages, and there weren’t any horses, feed, or tack to store, the larger carriage house was scaled down to the standard residential garages we use today. That said, garages needed to be as protected from the weather as possible because early automobiles were completely open, so they needed a weatherproof environment when not in use.

Early garages came in multiple forms. Some were attached to the residential building, but most were detached from homes, and that continued to be the case until well into the 20th century. In any event, the first written record of the term “garage,” is in a 1902 dictionary, where its French root, “garer,” refers to a shelter or cover.

First was the sliding door

The first major change from the dual-opening carriage house style doors was sliding door versions. The addition of circular casters on a horizontal track made it much easier for drivers and car owners of all ages and abilities to open and close their own garage door – regardless of their upper-body strength.

There were also sliding versions designed with accordion-like, folding sections, which meant garages could be narrower and take up less space.

Then came the overhead, hinged version

A man named J.C. Johnson, owner of a company called Overhead Door Corporation wanted to design a door that was more streamlined and easier to open. In 1921, he successfully invented an overhead door that opened by lifting and swinging it upwards, allowing it to rest parallel to the garage door when in the fully-up position. The spring action eased the burden of the door weight from the person opening/closing the door to the opening mechanism’s structural strength.

Later on that same decade, he invented an electric, automated version, but these were largely unavailable to the majority of Americans because they were too expensive.

By the 1950s, as post-war housing boom and a growing economy – along with an obsession with modern conveniences – developers began promoting the attached garage model. Attached garages have since become the norm, and they began to expand in size to the two-car garages we’re familiar with today as households recognized the benefits of a multi-car ownership.

Garage doors through the ages went from wood to metal

Until the 1970s, most garage doors were constructed from wood, and this meant they were heavy and cumbersome to operate – especially if you didn’t have an electric garage door. However, as steel and metal prices came down, and fabrication processes continued to innovate, the wood garage door made way for aluminum, steel, and fiberglass options.

Fabricated doors were typically more affordable than their wooden counterparts, easier to maintain and repaint, and they are certainly lighter and more efficient to operate.

Garage doors have come a long way in the past several hundred years, and today’s homeowners have the ability to choose from an unbelievable range of styles, décor, colors, and automatic system features.

If You’re Ready To Update Your Garage Door

Are you in the market for a new garage door? Contact us here at R&S Erection of Vallejo to schedule a free, no-obligation consultation. We’ll help you choose the best, contemporary garage door for your needs.